Tights and Leggings for men. 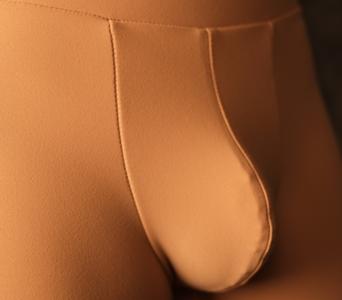 First I want to explain how amazing it is to wear these new men’s spandex tights along with how I am using them. I have always loved wearing Nike, New Balance and some of the other major label men’s sport tights. Spandex tights look great and there are few fabrics if any that feel anywhere near as hot and sexy as spandex does on your body. The one thing I was searching for were tights that made you look even sexier. When you see the girls working out many of the tights they wear go way up their butts and show off the shape and size of the ass and the cheeks, like spitting the peach. Some of the hotter designs for women actually show the shape of the vagina also know as a camel toe but I could not find anything for men that would show off the penis or go deep between the cheeks to show off my assets. That was until I found the Pinnacle Sport tights by Koala. These were the most amazing men’s tights I had ever seen. I ordered a few pairs online and was thrilled to see how incredible the quality, construction and best of all the sexy way they looked on me were. Best of all they were made in the USA, wow what a concept! clothing made in the USA.

Everyone is Wearing Men’s Spandex Tights

There are quite a few men wearing men’s spandex tights these days, to the point that it is slowly creeping in to everyday life habits of people you normally wouldn’t consider to wear something like this. Just the other day, for example, I saw a catholic priest wearing tights while he was coming out of the gym. Now that isn’t really that big of a deal as he was coming out of a gym after a workout and it’s good to see that he is trying to take care of his body, but it caught me by surprise to see a priest with a collar wearing tights. I never would have that thought I would ever see something like that and here it was in front of me. I wanted to ask him about his men’s spandex tights but I didn’t want to seem overly creepy about it so I didn’t. It is still amazing that so many guys are wearing these tights but I am glad that it is happening because I love wearing them and now I don’t feel so alone.

I have just found out that you can order leggings for men online and I am shocked by this for some reason. I have always known about leggings but I thought it was only those women that worked out and did yoga all the time that wore things of this nature. I never thought guys would actually wear something this feminine for some reason. I am not saying anything bad against guys that would wear leggings or anything, but it just did not seem like something men woudo. At least not to me. I guess there are more things in this life that I could have imagined.

I am rather old and seeing guys wearing leggings for men is shocking to me. I grew up with one good pair of pants for church and a couple pairs of jeans for school and chores. So seeing guys wearing something like this is weird to me. But I will applaud their effort to living their lives in a manner that makes them happy. I fought in the army to make sure that people could live with the freedom to choose how to live their lives and I am proud that these guys are choosing something they enjoy. But I do not think that I would be able to do that.

Maybe one of these days I will break down and buy my own leggings for men just to see how bad they would look on me. I am pretty sure that I would not be going out in public with them on but maybe I can convince my wife to let me watch football in them one Sunday. I think the old lady would have a heart attack if she saw me wearing something like this around the house without anything else on. Maybe I should hold off on buying them until she gives me the okay to do so. Or maybe I will surprise her on our sixtieth wedding anniversary with a sexy pair of leggings and me jumping out of a large cake.

I want my friends to get involved in wearing men’s spandex tights, but I don’t think they are going to go along with me. For one, they don’t even know that I enjoy wearing tights so trying to explain that part is going to be a bit difficult. But then I will have to try to get them to pick out designs that they would feel comfortable wearing and that isn’t going to be easy either. They are going to fight this every way they can, and I don’t know if I can last long enough to see things through to the end. One option I have is to buy my friends the men’s spandex tights that I think they would like to wear and give them as presents. I could be wearing mine at the same time and that should make things a bit easier for me in the long run. I would still have to explain to them why I bought them something like this, but I can worry about all of that when the time comes. I just want them to see that I can wear things like this and be the same person that they have always known.